Stuck in traffic in the chaotic streets of Manila, I began to utter words of disgust as to what was taking me like eternity into a supposedly short visit to a friend who decided to stay and find a living in the metropolis. Wondering, I opened the bus curtain and gazed outside. Well, the same helter- skelter set up which is common in most of the cities in the Philippines have then resurfaced. I should not be surprised though, after all, this is Manila and what other things can I expect if not about its proverbial road congestion?

I reclined myself and eased away my sight from the busy people cramming the sidewalk, the beggars on every corner, the vendors whose stalls were partly lodged on the road, the rickety jeepneys and buses racing side by side and the maddening sight of garbage piled anywhere. For a while I grappled at this pathetic sight but later surrendered and sighed. Sometimes, moment like this makes me think about the goodness of having to spend the early episodes of my life in the province.

Talking about the province, I have had the chance to experience the life which is very much different from the urban subsistence. The restfulness is what makes the difference more elaborate between the two settings, on where, it is more relaxed in the province than in the city. The disarrayed system is one of the many bad effects of industrialization in the city, the very cause on why there is heavy traffic on the road, and on why the chaotic environment is underway. The situation makes me think about those people who permanently dwell in places like Manila, those who don’t have the luxury to afford living in posh subdivisions, those people like my friend whom I’m going to visit who can only afford living in shanties and those fellows who don’t have provinces to go home to. They need to, in whichever way possible, bear the haphazardly kind of environment day in, day out.

Well, I am not saying that living in cities in the Philippines has no beauty at all. In fact many people are still attracted to its allure, leaving their piece of wealth in the province and taking guts just to taste the urban life. I, too, was one of them. I have thought that greener pastures are in the city, much greener than the fields I have been seeing ever since (or so I thought). I have tasted everything the city could offer then—the glamorous night life, the classy corporate jobs, the excitement and wonders brought by malls and other convenient centers, the fancy diners, the technology and innovations that make life a bit easier, and most of all the promise of progress which, in the most practical sense, attracted the rural folks to embrace the city life.

However, in times like when I glance at the bus window and all I could see is the city’s messy atmosphere, I feel like withdrawing or trading all the advantages it can offer to the simple charm brought about by living a rustic life. For about seventeen years, I have had the luxury to enjoy what the province can offer. Having spent my childhood in one of the beautiful towns of Catanduanes, a place we call Panganiban that, in one way or the other, resembles into a small paradise made me feel fortunate. I say fortunate because I don’t need to grapple with the chaotic scenarios like the traffic and other undesirable things we see in the metropolis.

Back in my small town (Panganiban), I was blessed that our humble home is nestled in front of a vast rice field and in close proximity to a long stretch of creek, wherein I can enjoy the pastoral view. In the morning I would see farmers busy doing business in the fields. There are those who collect snails, plow using carabao, plant rice and if it’s harvesting season, there are those farmers who pile hay and children who play kites. And often I would see those small wooden boats sailing in the creek back and forth. I would also see fishermen, crabbers, and even children who play mud at the creek. These are the recurring scenes on my mind, scenes that depict the rural life, which perhaps became the reason on why I was always yearning for a laid-back life in the province. 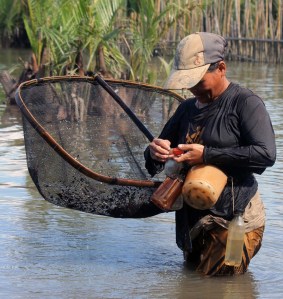 “A woman carrying a shrimp push net (Agahid).”
Creeks ( Suba) provide the people of Panganiban a source of food and income. Aside from delectable crabs, shrimps also thrive on it. Shrimps like crabs give the town people the means to satisfy their daily needs. If there’s no food at the table, one can just grab his/her shrimp push net and just descend on the waters.

Crabbers are group of folks that comprise the labor force in Panganiban. Panganiban being blessed with abounding sea creatures—crabs, paved a way to creating a decent livelihood for its people. These folks endure the hardships of being exposed to the heat of the sun for a whole day throwing and hoisting the traditional ring-shaped crab nets with the hope of catching more crabs to take home for their family.

Back to the place where I was at the moment, I opened all over again the bus curtain and gazed outside. As expected, the traffic has barely moved an inch. Again, I lounged at my seat and sighed.

A twenty-something lad, who wishes to unravel more of society's unfathomable ironies. END_OF_DOCUMENT_TOKEN_TO_BE_REPLACED
This entry was posted on Saturday, January 3rd, 2015 at 5:23 am and tagged with catanduanes, home, Manila, panganiban catanduanes, province, rural, rustic, shanties, traffic, urban and posted in Uncategorized. You can follow any responses to this entry through the RSS 2.0 feed.
« A new beginning…
Getting older… »

15 responses to “Missing the Rustic life…”